Warning: "continue" targeting switch is equivalent to "break". Did you mean to use "continue 2"? in /homepages/30/d399547829/htdocs/blog2/wp-content/plugins/revslider/includes/operations.class.php on line 2758

Warning: "continue" targeting switch is equivalent to "break". Did you mean to use "continue 2"? in /homepages/30/d399547829/htdocs/blog2/wp-content/plugins/revslider/includes/operations.class.php on line 2762

Warning: "continue" targeting switch is equivalent to "break". Did you mean to use "continue 2"? in /homepages/30/d399547829/htdocs/blog2/wp-content/plugins/revslider/includes/output.class.php on line 3689 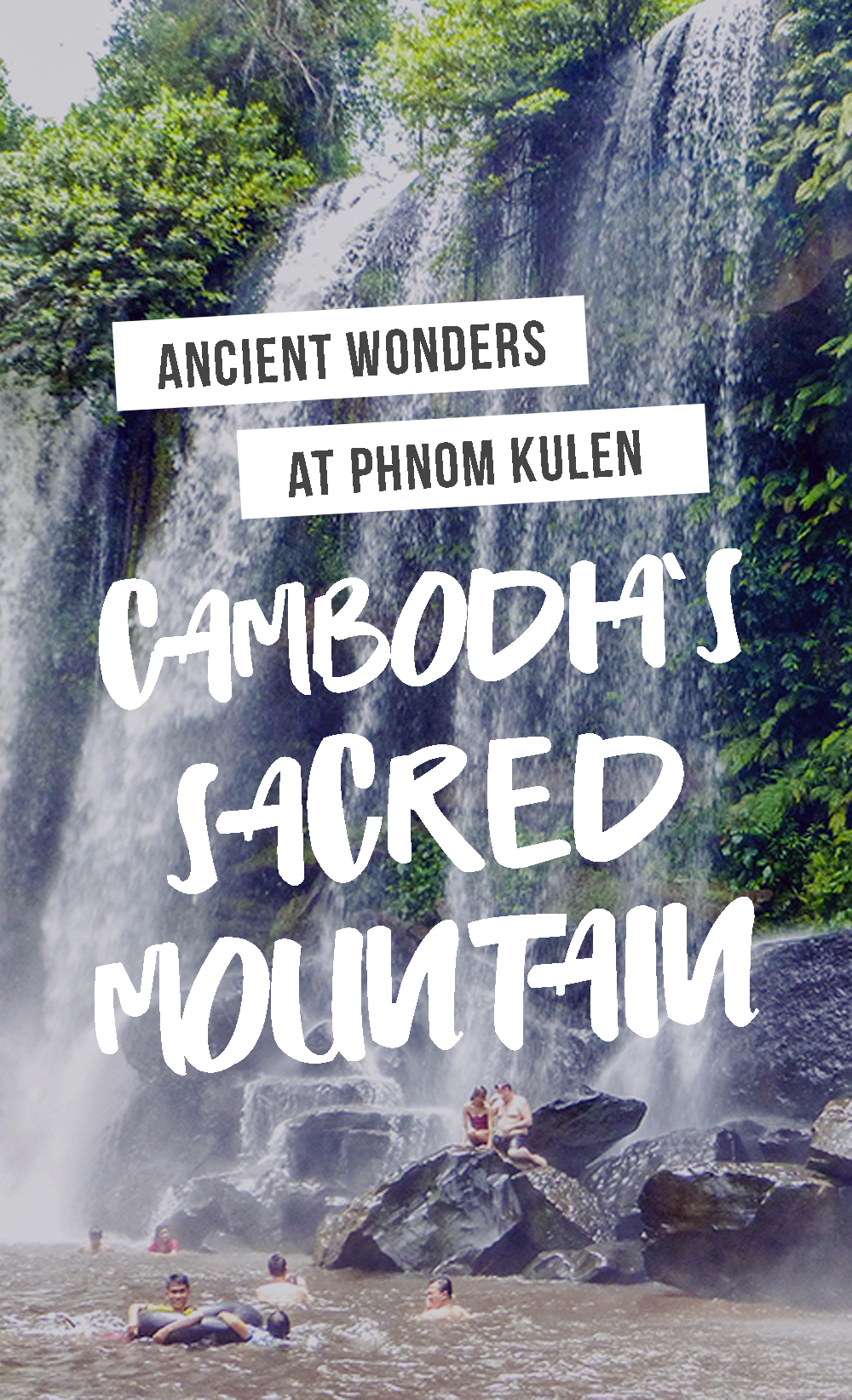 With my head still spinning from the enormous amount of information that my eyes and brain were struggling to process, I entered my guesthouse at the end of my two-day temple romp with sore feet, a fresh sunburn and clothes drenched in sweat. The guesthouse owner called me over to the front desk with a smile and I hobbled over reluctantly, eager to get upstairs to my room and sit in a cold shower for the rest of my life.  As he handed me a white envelope with an all-too-familiar voucher slip inside, I suddenly remembered that I had requested another tour for the following day, but was told that it might not operate due to it being the low tourist season. Somehow the stars aligned yet again and I felt my tired body recharge in an instant. The temples were magical, but it was time to take a trip up to my home away from home: the mountains!

My guesthouse had provided a booklet of various tours and places to visit on the nightstand next to my bed, which I spent an ample amount of time perusing while I was sick the week prior. In my excitement to see Angkor I hadn’t really considered and other sightseeing possibilities in Siem Reap, but it turned out I had completely overlooked Phnom Kulen National Park. It would take about an hour and a half by car to reach the top of Kulen Mountain, but after browsing through photos of the lush jungle and towering waterfalls, I was sold.

I hopped in the minivan the morning of the tour and was greeted by the driver and my guide, Sophea, who promptly informed me that I was the only one who had signed up for the day. Despite being a little bummed that I wouldn’t get to meet any fellow travelers, I was already pretty used to this being the case and was mostly just thankful that they had decided to run the tour at all (I had briefly considered taking a tuk-tuk but was told that only vans or motorbikes would be capable of making it up the winding mountain roads). We settled in for the long haul up to the top, and in between bouts of me staring in awe out the window at the beautiful scenery, Sophea provided some history on the area and its connection to Angkor. Kulen is considered one of the holiest mountains in Cambodia and is said to be the birthplace of the Khmer Empire in 802, under the rule of King Jayavarman II. The sandstone used to build Angkor was quarried from the area, and it was also the last Khmer Rouge stronghold before the regime collapsed in 1979.

We slowed to a stop at the top of the mountain and a group of children swarmed us as we opened the car doors. Sophea smiled and motioned for one to follow us: an eager young boy in a red shirt. He quickly led us towards a large stone staircase surrounded by garuda and naga sculptures and the three of us began the ascent. Food vendors and beggars lined the path, shouting and clamoring for the attention of the tourists streaming steadily past them. We eventually emerged at the bustling base of Wat Preah Ang Thom. Local Khmers who made the pilgrimage up the holy mountain prayed diligently at small shrines, and the smell of incense permeated the air. 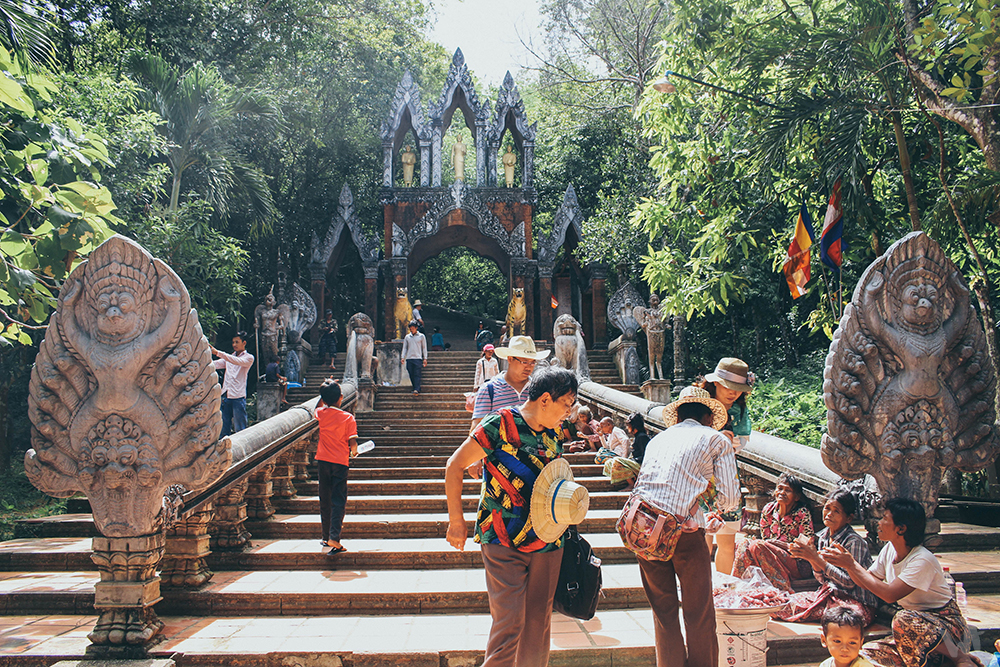 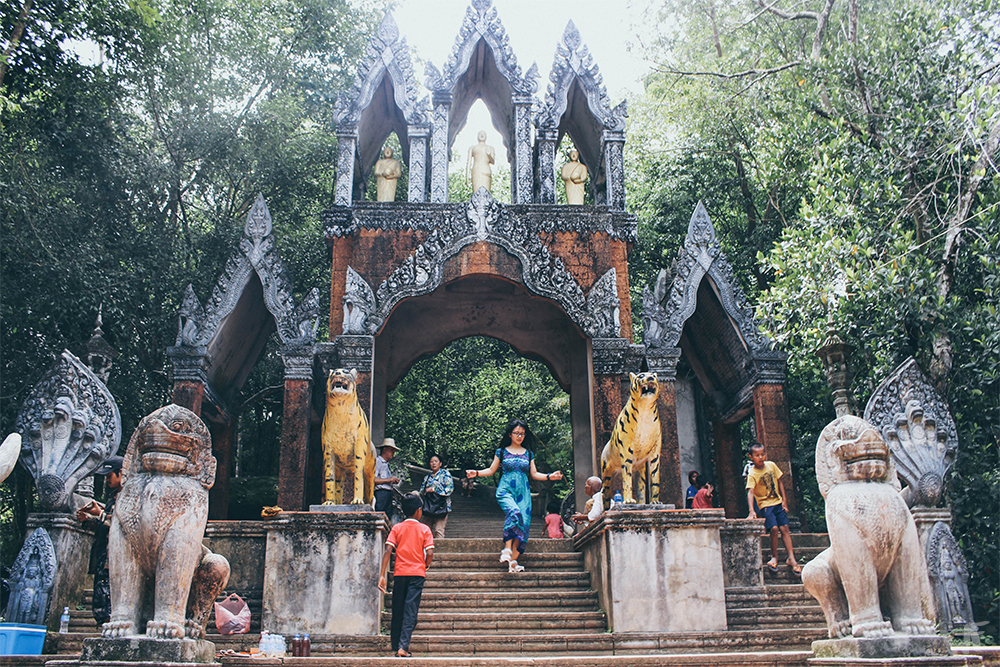 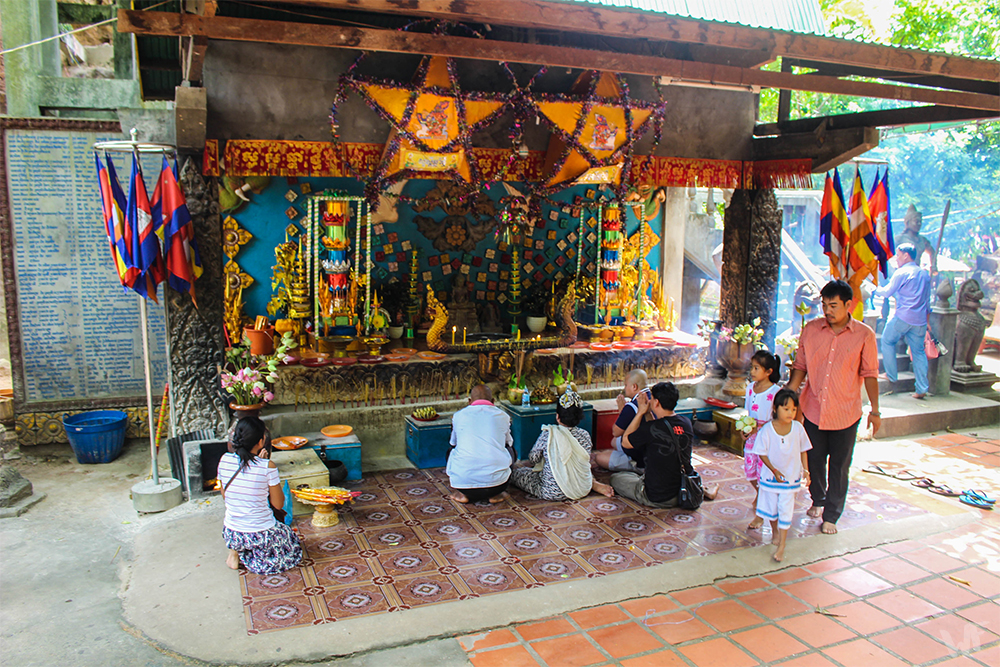 The little boy led us to a stone bench where we sat down, and I noticed that the surrounding area was littered with flip-flops and sneakers. Sophea turned to me and said, “Do you know why this little boy followed us up here? It’s so that he can earn a bit of pocket money by watching our sandals while we head up to the shrine.” I suddenly noticed a few other children sitting on the ledge nearby, swinging their feet and diligently guarding the footwear of tourists who arrived before us.

We kicked off our shoes. As with entering most temples in Asia, it is proper to remove footwear and dress modestly with shoulders and knees covered. We then headed up some recently renovated stone scaffolding surrounding a giant boulder (I was told it used to be made of wood up until a few years ago). Before we headed into the building at the top, I took some photos of the sweeping landscape from my high vantage point. Sophea stood next to me, leaned his arms across the railing and told me with a sigh that he wished the people living on the mountain were afforded a better quality of life. There was no hospital and poverty was rampant. When I asked if people ever left the mountain for school, medical care or even job opportunities, Sophea’s response was “not really.” They just didn’t have the means or the money to make trek up and down the mountain. Despite the $20 ticket fee for foreigners entering the national park and the millions of dollars brought in per year from the ticket fees to Angkor, Sophea wistfully remarked that the local Cambodians barely see any of that money due to the high level of government corruption and that only a fraction of the funds even goes towards preserving the sacred sites. He also told me that although he graduated college with a degree in tourism and was supervisor at one of the many nice hotels in the Siem Reap area, he still did these tours in his spare time to make a livable wage.

After that sobering conversation we stepped inside the Wat, where an enormous, 17-meter long reclining Buddha had been carved entirely out of stone sometime in the 16th century. I then realized that the Buddha was actually carved into the boulder we had just climbed and that the structure we were in had been built around it. It must have been pretty cool to look up and see a giant Buddha surrounded by dense green foliage back before the pagoda existed. Colorful prayer flags hung from the ceiling, providing contrast to the overwhelming shimmer of gold, and smaller sculptures of Hindu deities lined the base of the statue. I donated some riel to a glass case that asked for donations to maintain the Wat and help sustain the local people living on the mountain. As always, I left wishing I could do more. 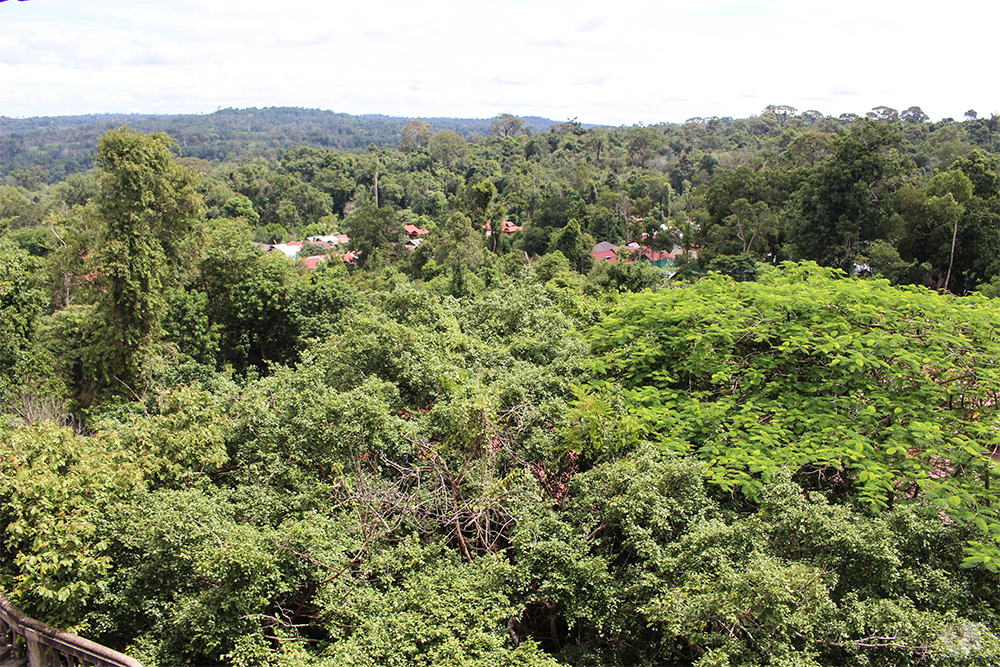 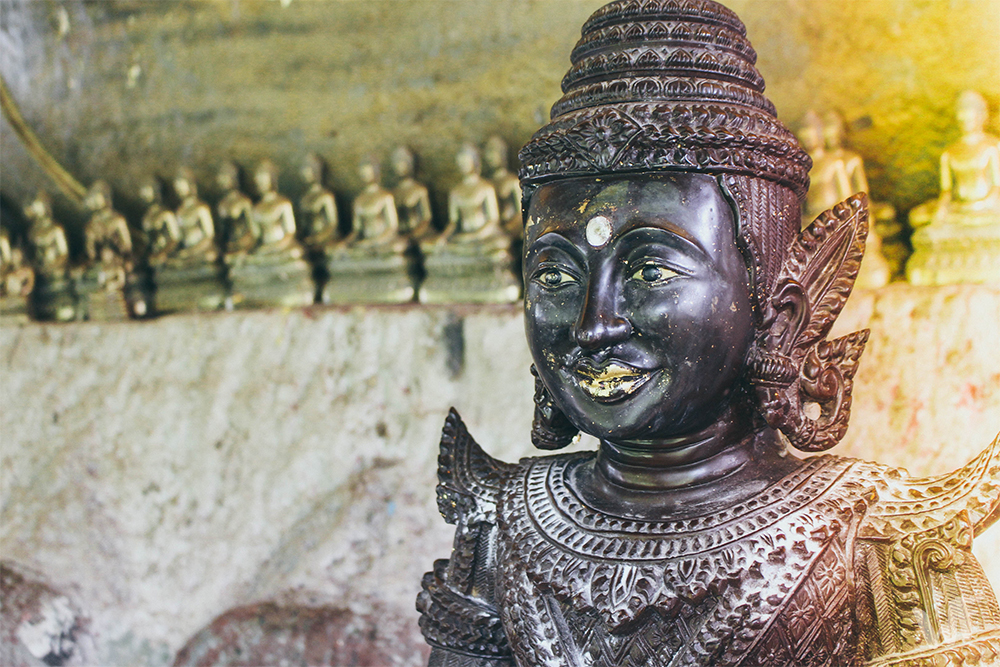 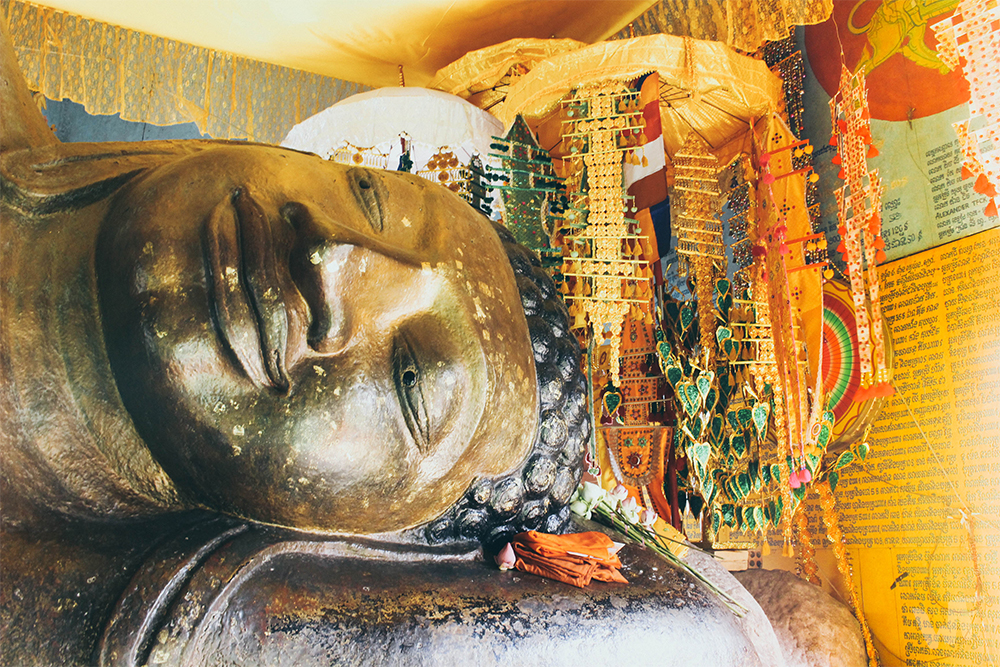 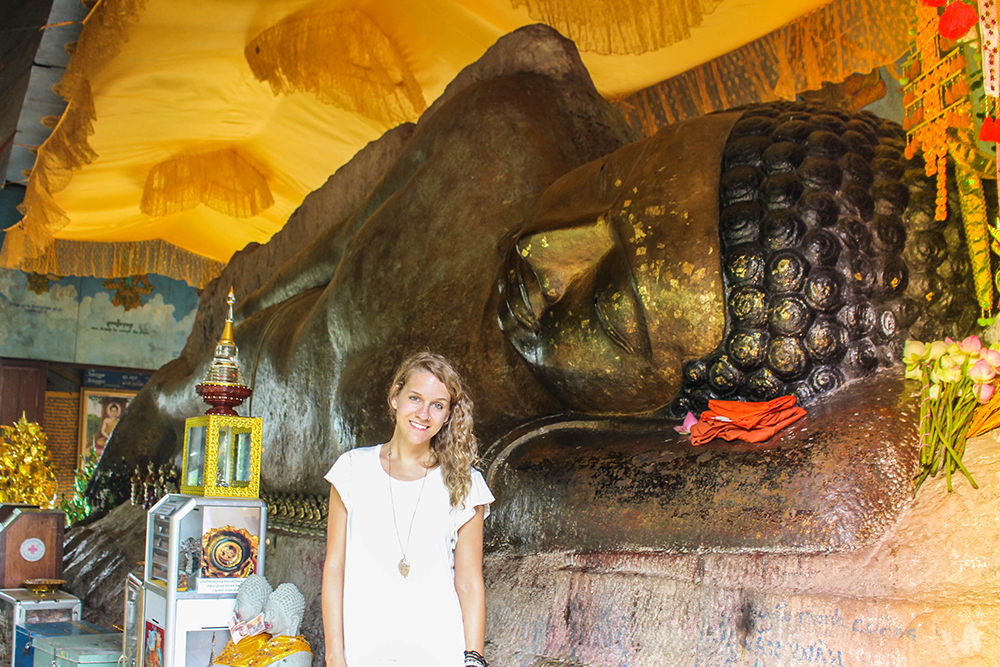 After we descended we were greeted by the cheery boy in the red shirt, who presented our shoes and skipped away after I gave him a bit of riel for his trouble. We made the trek back down the long, stone staircase and hopped back into the van to our next stop: the Kbal Spean River, also known as the “River of 1000 Lingas.” I had no idea why we were hiking along the edge of the river until Sophea instructed me to look down. Sure enough, covered in rushing water and being flanked by tourists, were hundreds of lingas (phallic symbols of the Hindu god Shiva) carved into the sandstone riverbed in addition to various other deity faces and detailed scenes from Hindu mythology. I was told that the lingas were carved to help make the river fertile, since it connected to the Siem Reap river and supplied water to all of Angkor. Because it was rainy season and the river was high I didn’t get great views of the underlying artwork, but it was still a pretty beautiful sight. 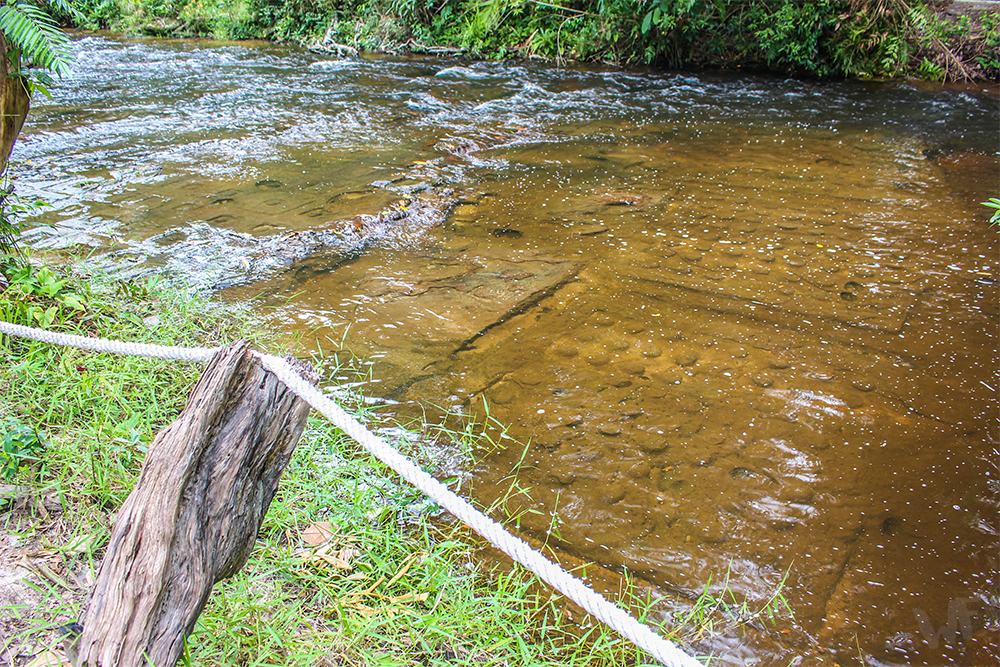 River of a Thousand Lingas 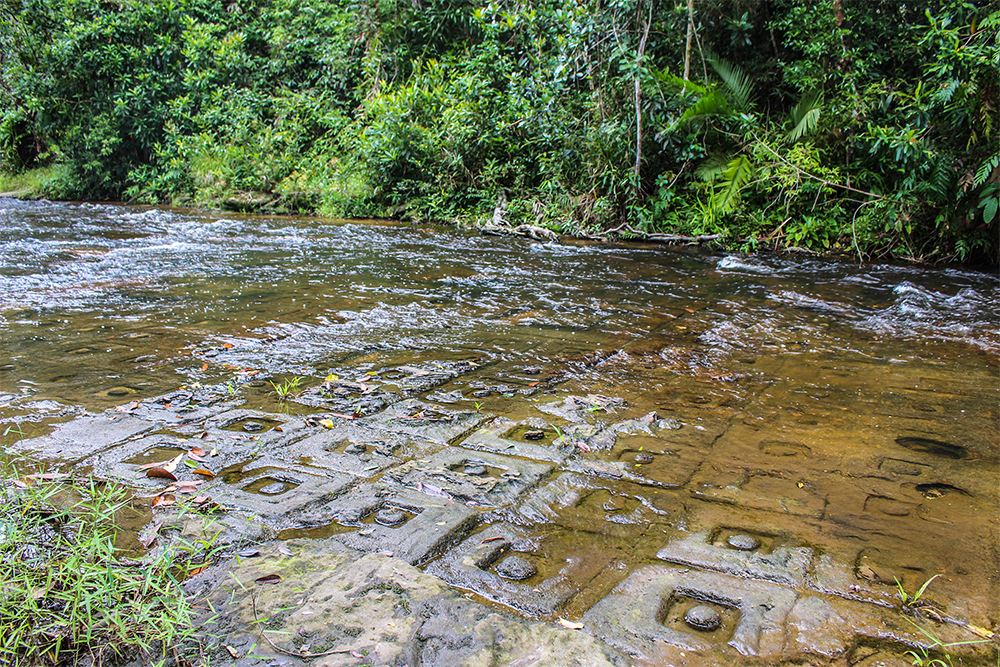 Detailed carvings in the sandstone riverbed

The waterfalls were our last stop. Sophea walked me to the top of  them, past a long, dusty road of souvenir kiosks and food stalls, and told me that if I wanted to swim I could rent a locker to store my things for $1. I made my way down some steep, manmade scaffolding to get to the base, where a large pool full of swimming tourists and the deafening roar of the falls greeted me. I had not brought proper swimwear so I opted to wade waist-deep in the falls and juggle my three cameras around instead; pretty sure this was the one time during the entire trip that I used my waterproof camera. Worth it!

The pool area was a lush, jungle paradise filled with giant boulders, hanging canopies and tropical flowers framing the 20-meter-high falls. There were two swinging chairs set up for photo opportunities, and the one closest to the falls was manned by a young local girl who appeared to be accepting donations in return for snapping photos. The water was unbelievably refreshing in the wake of the beating heat and humidity I’d come to know so well. The area might have been flawless if it weren’t for the empty bottles and other random litter left behind from picnics and swimmers, strewn depressingly about the rocks. 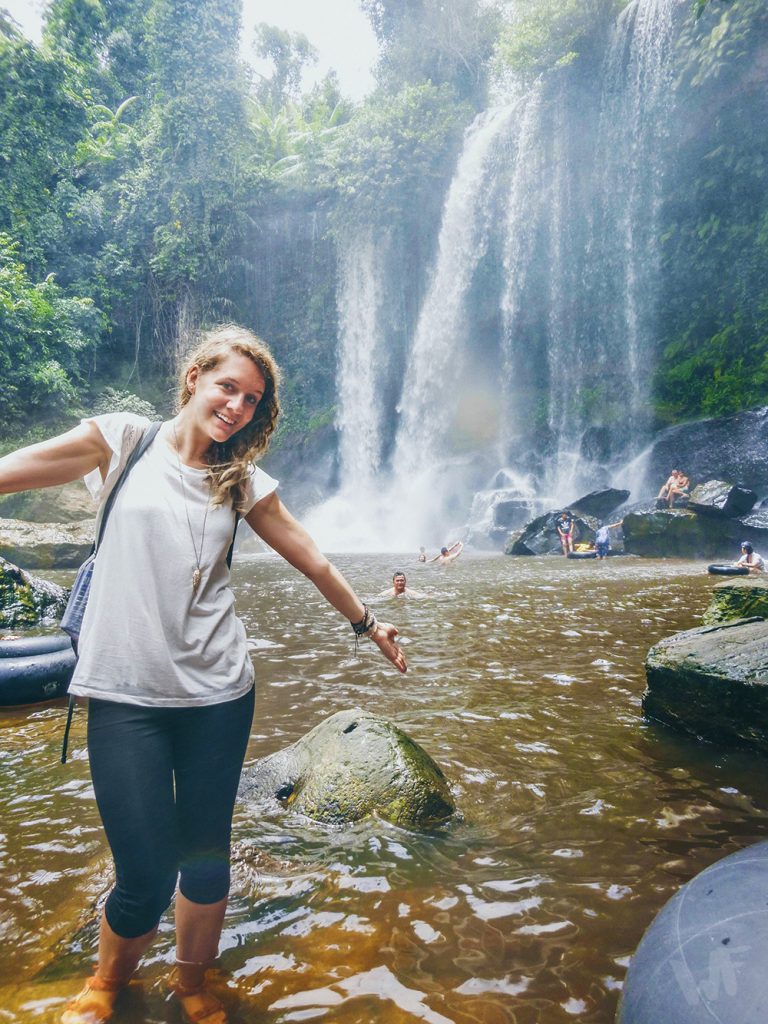 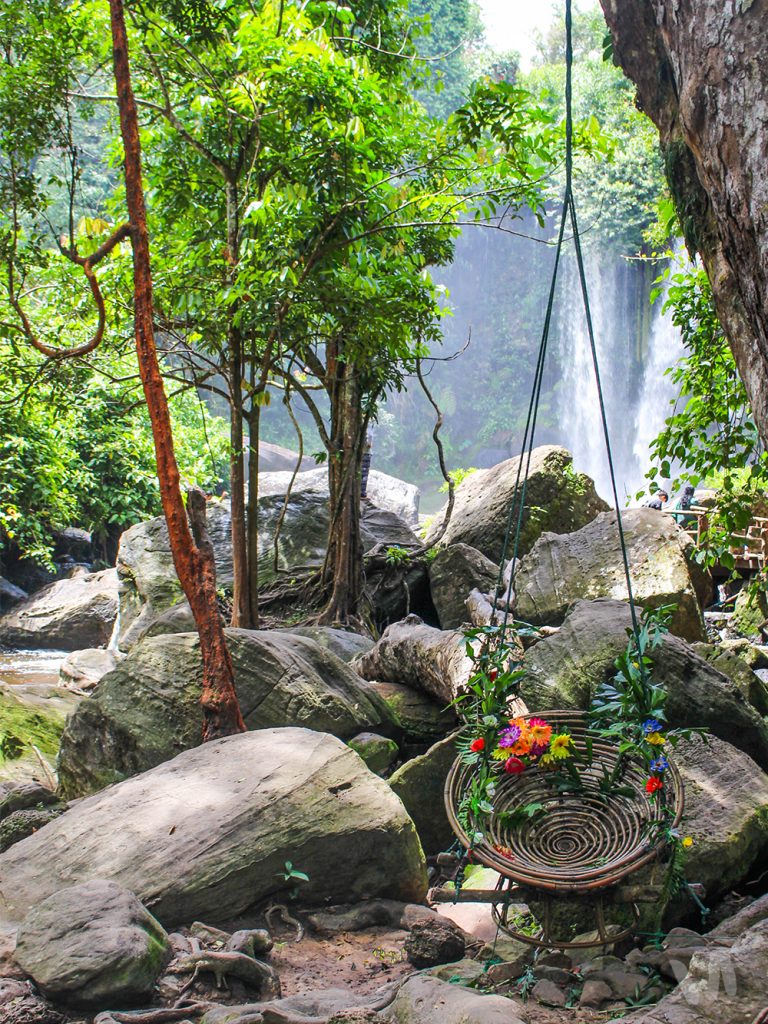 I spent a decent amount of time wading around, jumping over rocks (it’s a miracle my backpack never got wet) and finally decided to climb back to the crest where Sophea was waiting for me. Or at least, where I thought he was waiting for me. Somehow he didn’t see me and went back down to the falls to look for me while I walked aimlessly up and down the road hoping to find him. After at least a half hour of both of us most likely walking past each other repeatedly, we finally reconvened and hopped in the van for the long trek home.

This day sticks out in my mind as particularly memorable, I think mostly because it was so unexpected. I had no idea the park even existed until I arrived in Siem Reap, so getting to see something so epic and totally different from the temples was a treat.

And there we go, this post is it for Cambodia; the gorgeous and memorable country filled with friendly people and mysteries from another time. Next up is the equally wonderful Thailand – catch you all on the flipside! xx